Apple officially announced two new larger phones on Tuesday, the iPhone 6 with 4.7-inch display and iPhone 6 Plus with 5.5-inch display, both of which come in gold, silver, and space gray. Both phones also have a new body design with rounded edges, instead of the straight edges on the iPhone 5S. The 5.5-inch screen iPhone 6 Plus is by far the largest phone Apple has created, dwarfing the iPhone 5S’s 4-inch diagonal screen. It comes after recent leaks showing purported components for a 5.5-inch screen device, and years of rumors indicating Apple was making larger-screened phones.

The iPhone 6 Plus starts at US $299 for a 16 GB model, $399 for a 64 GB model, and $499 for an all-new 128 GB model, the largest storage yet on an iPhone. Pre-orders for both phones begin on Friday, September 12th and in-store sales and shipments start one week later on Friday, September 19th, in the US, UK, Australia, Canada, France, Germany, Hong Kong, Japan, Puerto Rico, and Singapore. In the US, both phones will be available in online, in Apple Stores, and through all major carriers (Verizon, AT&T, Sprint, T-Mobile). Apple says both phones will expand to 115 total countries by the end of the year.

Aside from the larger LCD display, the front of the iPhone 6 Plus is also made with “ion-strengthened glass.” The back of the phone is made of anodized aluminum with a stainless steel Apple logo. At 7.1 millimeters thick, it is thinner than the 7.6-millimeter iPhone 5S. However, it’s also heavier: 6.07 ounces (172 grams) compared to 3.95 ounces (112 grams).

The iPhone 6 Plus appears to have the same 16:9 aspect ratio as the iPhone 5S and 5C from last year, meaning older apps designed for the 4-inch screen found on those models, and the even older iPhone 5, won’t be distorted running on the larger screen. The screen resolution for the 5.5-inch iPhone 6 Plus has been increased to 1920 x 1080 pixels at 401 pixels-per-inch (ppi), 185 percent more pixels than the 1136 x 640m 326-ppi resolution found on last year’s iPhone 5S and 5C. Apple calls the new screen resolution on both new iPhones “Retina HD,” an improvement on its Retina screens first introduced on the iPhone 4. The phone also has dual-domain pixels for what Apple notes are wider viewing angles.

The big question with a larger screen is how it affects battery life: Apple says that it managed to cram a longer-lasting and bigger battery into the new iPhone 6 Plus. The phone gets 24 hours of 3G talk time, up to 16 days on standby (384 hours), up to 12 hours of internet use on LTE/Wi-Fi, and up to 14 hours of video playback.

The iPhone 6 and 6 Plus come with new software features, chief among them iOS 8, the latest version of Apple’s mobile operating system, which will be available beginning on September 17th for all devices going back to the iPhone 4S.

But only the Apple iPhone 6 and 6 Plus offer Apple Pay, an all-new NFC mobile payments system that lets you pay for things with your phone instead of your credit card at checkout counters. Shown off in the event, you just have to hold the phone up to a checkout reader while holding the Touch ID sensor/home button. The system works by storing your credit card numbers in the Passbook app, although Apple notes that neither it nor retailers have access to the information. It will roll out first in the US with participating companies American Express, MasterCard, and Visa, as well as the biggest six banks in the country. An NFC payments system had been rumored in the days ahead of the event. 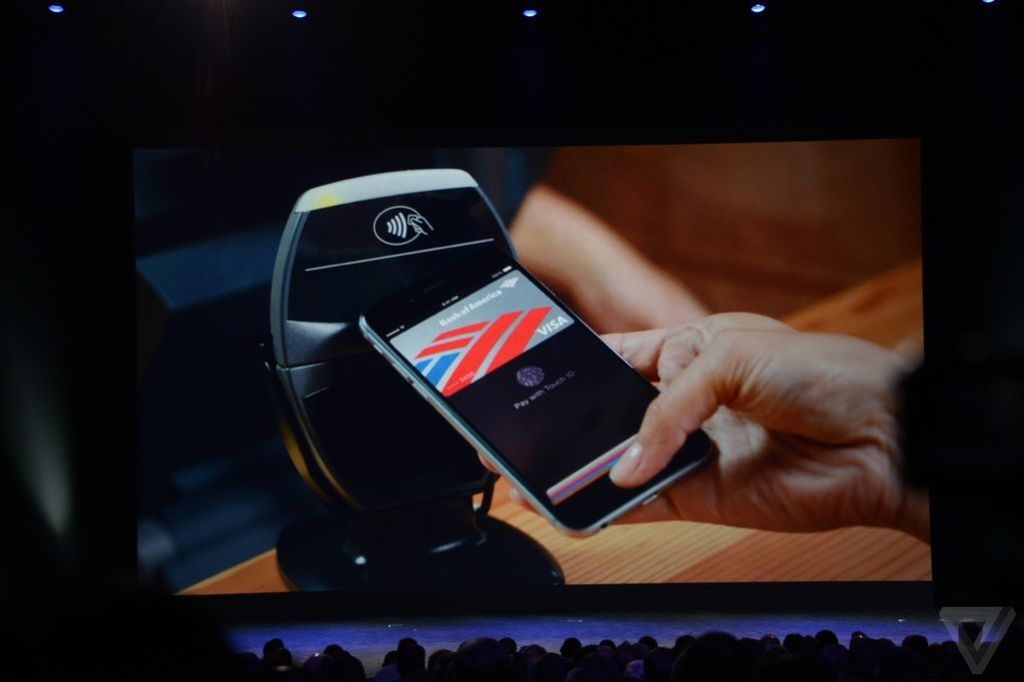 Apple introduced a new gesture called “Reachability,” to account for the increased screen size of the iPhone 6 and iPhone 6 Plus. Double touching the home button now slides the entire display down, so that you can access the top software buttons in whatever app you’re in. For example, if the “back” button at the top of the Safari web browser is too far away, double touching will slide the entire view down so you can tap it more easily. 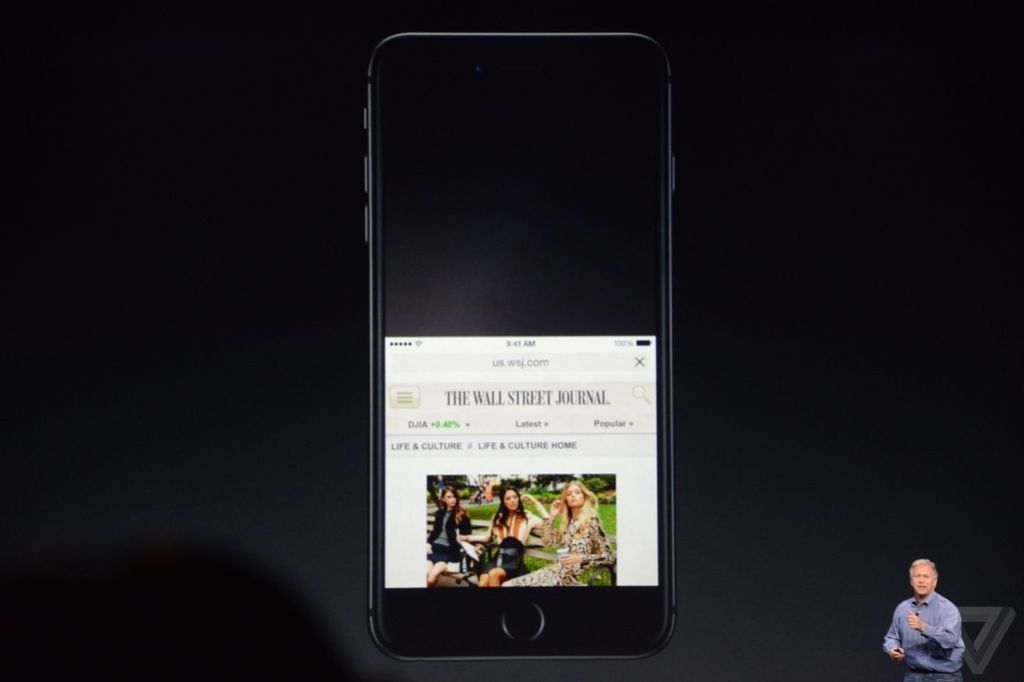 Another new software feature, Display Zoom, takes advantage of the extra real estate on both the iPhone 6 and iPhone 6 Plus. While both phones offer a new sixth row for apps on the home screen, engaging Display Zoom will increase the icon size so that only five rows of apps show at a time.

The iPhone 6 Plus and iPhone 6 Plus have a new front-facing iSight camera. It’s still 8 megapixels like last year’s iPhone 5S, though Apple boasts of a new sensor that offers “Focus Pixels” a system allowing faster autofocus and advanced noise reduction. Apple says it’s improved video capture as well, with the camera now capable of recording 1080p video at 30 or 60 frames-per-second, and Slo-Mo video at 240 frames-per-second. The iPhone 6 Plus front camera features optical image stabilization, while the iPhone 6 features digital image stabilization. Panoramas have been increased to up to 43 megapixels now from 28 megapixels on the iPhone 5S. The FaceTime HD camera (rear-facing) also got an upgrade with a new sensor and f/2.2 aperture, which Apple says allows it to capture 80 percent more light. Further, features that were first introduced on the iSight camera including Burst Mode and HDR video have now been integrated into the FaceTime camera.

Both new iPhones allow apps to show more information than on previous iPhone screens. For example, in landscape mode, the Mail app will show both a list view of messages on the left side and the content of the selected message to the right, similar to how it is displayed on Apple’s iPad Air and iPad Mini. The Messages, Stocks, and Calendar apps have been similarly redesigned to show more content off to the left side of the screen. 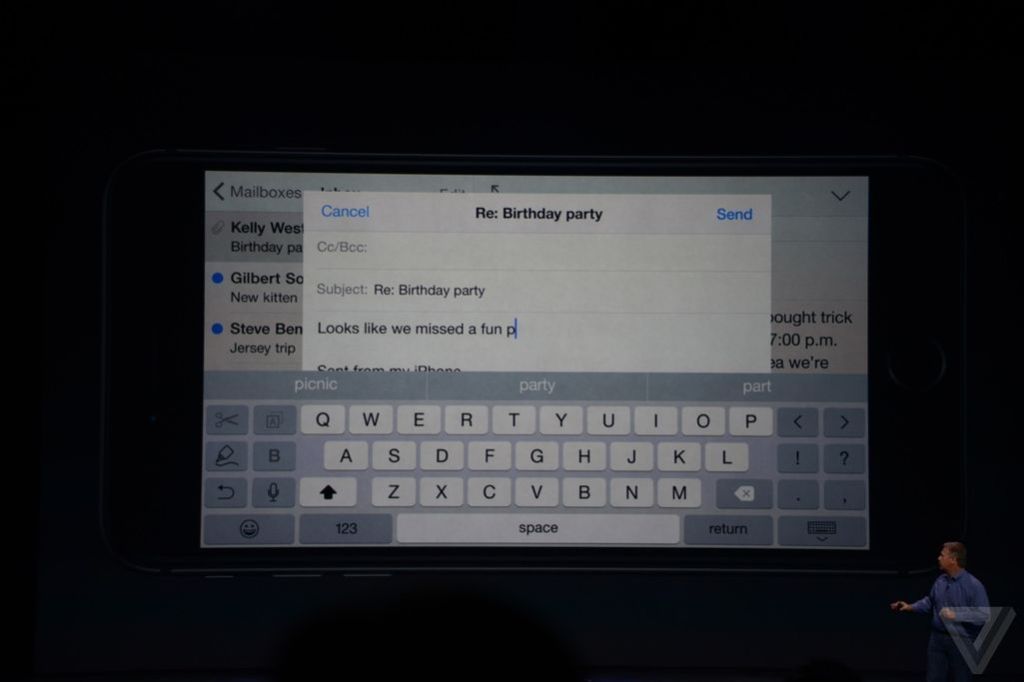 The home screen has also been given a new landscape mode.

The home screen has also been given a new landscape mode that automatically turns all your app icons 90 degrees so that they read and display correctly (instead of on previous iPhone models, when they just remain in portrait orientation). 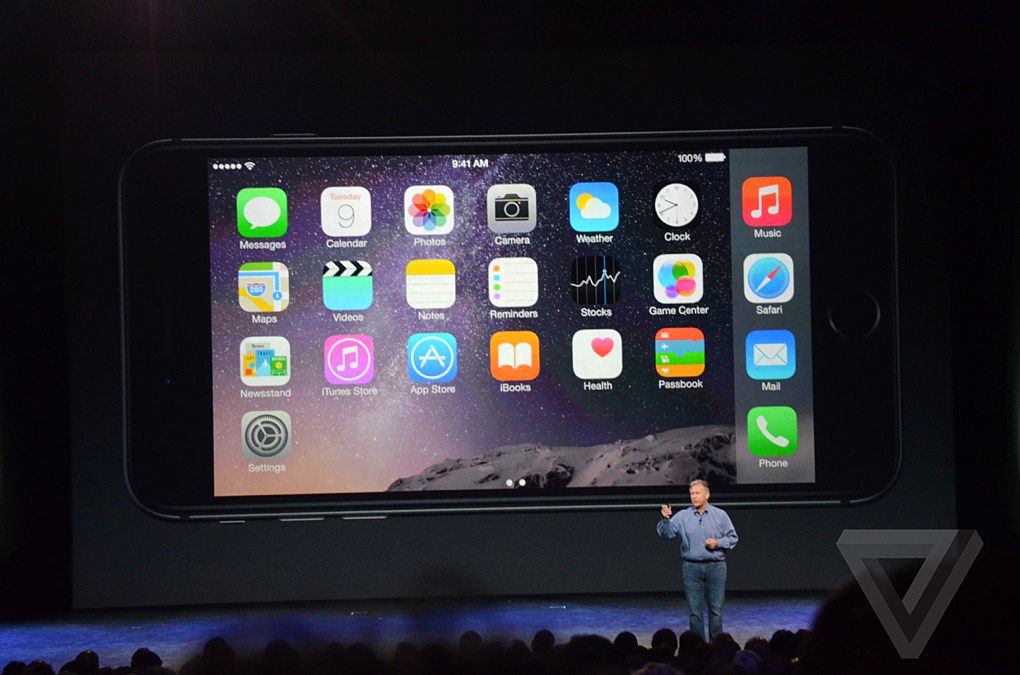 Apple boasted of the gaming experience afforded by the iPhone 6 Plus with its Retina HD screen, which uses the Metal 3D gaming development software the company unveiled in June at its Worldwide Developer Conference.

The new iPhone 6 and iPhone 6 Plus also come with a new M8 motion chip, an improvement over Apple’s M7 motion chip from last year. Apple says the chip can differentiate between activities, including cycling and running. Further, it can calculate distance traveled and elevation, the latter thanks to a built-in barometer. The M8 will come in handy with Apple’s HealthKit software, a lifestyle and fitness tracking platform the company unveiled in June that appears as the Health app on the home screen.

Apple says it improved LTE on the iPhone 6 and iPhone 6 Plus, now supporting aggregation of over 20 LTE bands, more than any other smartphone. Download speeds on both phones over LTE have been increased to 150 Mbps. Over Wi-Fi, download speeds are up to 433 Mbps, three times faster than on the iPhone 5S. The phones now support VoLTE (voice over LTE) and Wi-Fi calling (802.11ac), but Wi-Fi calling is only available on T-Mobile in the US and EE in the UK for now.

However, numerous surveys (including Apple’s own) have shown many consumers prefer larger screen smartphones, particularly people in Asia, one of Apple’s largest and most important regional markets. Apple has previously shown a willingness to increase its phone screen sizes to cater to market demand: it increased the default iPhone screen size to 4 inches in 2012 with the release of the iPhone 5, from the 3.5 inches found on all previous iPhone models (iPhone 4S, 4, 3GS, 3G and original iPhone in 2007). Back in 2010, then-Apple CEO Steve Jobs mocked phone screens larger than 3.5-inches, calling them “Hummers” (a reference to the large SUV brand) and saying “you can’t get your hand around it.” Clearly, Apple has since expanded its thinking on smartphone screen sizes.

Are you getting one? We are!

If you found this post informative, please sign up for the FREE Week-o-Swag Magazine and we’ll send you brief, weekly updates. Thank you so much – Swagger Group Family