Blast from the past: Here’s how TheFacebook pitched advertisers in 2005

“TheFaceBook enables students to search for people at their school, find students who share similar interests or courses, look up friends of friends, network and visualize their social network via photos.”

That’s how Kevin Colleran, Facebook’s first advertising salesperson, explained the new social network in his first ad sales deck from April 2005, which he unearthed and made public this week.

Facebook launched at Harvard in February 2004, and rolled out its first advertisements two months later. Mark Zuckerberg, the company’s visionary and CEO, didn’t care too much about ads early on, so it was left to cofounder Eduardo Saverin to broker a few small ad deals with t-shirt businesses and movers — places that might appeal to young college students.

By early 2005, Zuckerberg seemed to recognize the need to scale up its ad operations. Sean Parker, Facebook’s first president and the founder of Napster, hired Colleran to sell marketers on the social network. Colleran’s apartment doubled as Facebook’s first “office” in New York.

In his first ad sales deck, which is focused on Starbucks, Colleran stresses the opportunity for brands to reach “verified college students nationwide,” and talks up the purchasing potential of this demographic. He also reveals that there were 1.9 million monthly users on the social network at the time — a far cry from the 1.35 billion monthly active users on Facebook today. 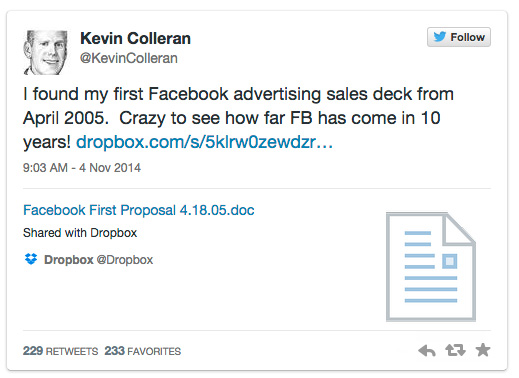 While the elements of what would make the social network a huge hit were there, the tools available to advertisers were still very rudimentary.

“Advertising opportunities at TheFacebook include traditional online banners, announcement (text only) ads, and custom groups designed to enable brands to create a following on-campus and interact with students daily,” Colleran wrote in the deck.

No News Feed ads (the News Feed didn’t launch until the following year). No app install ads, as the iPhone was still two years away. Just … banner ads. 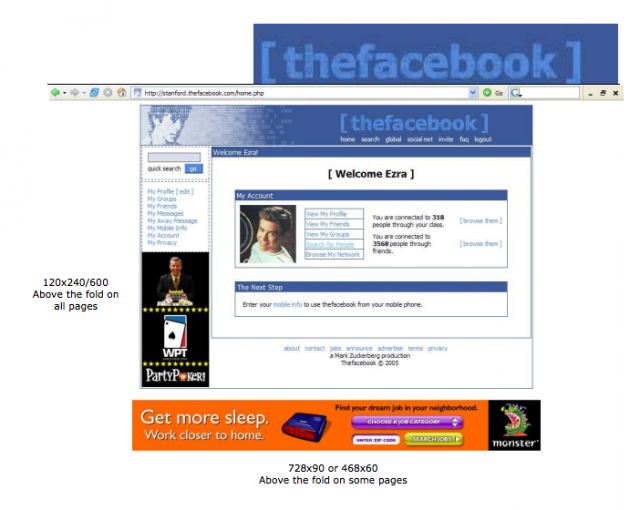 “It definitely wasn’t the type of revolutionary product that we came up with afterwards,” Fidji Simo, Facebook’s product manager for ads, told Mashable for a previous article about these early Facebook advertising efforts. “It’s really been a process to get to where we are at in terms of refining the experience.”

Facebook and Colleran did have at least one feature up their sleeve that would prove to be a selling point to advertisers down the road: targeting customers based on their Facebook profile information.

“By targeting students whose profiles indicate that they are ‘intensity hunters,'” Colleran wrote near the end of his pitch, “[Starbucks DoubleShot] can truly narrow down its promotion to reach the exact students who are adventurous and hip and looking for a product experience rather than just a drink.”

Have something to add to this story? Share it!